It’s spring time in Massachusetts and insects have started their nest building. During tank inspections our technicians have discovered that insects will build nests in protected areas like vent pipes and remote fuel ports. This can lead to problems with performance by restricting the flow of fuel into your oil burner or carburetor.

The photo below shows a large mud dauber nest that blocked a majority of the air flow to this underground storage tank. The oil burner supplied by this oil tank was cutting out frequently and the school maintenance department could not determine the cause. The city that operated this school called CommTank to perform an underground tank and piping test to check for problems. When we opened the vent port mounted on the side of the school building we found this large mud dauber wasp nest. It blocked two thirds of this 2 inch pipe and was preventing proper fuel flow to the oil burner. Luckily for the school, cleaning it out with a shop-vac was the fix for this problem. 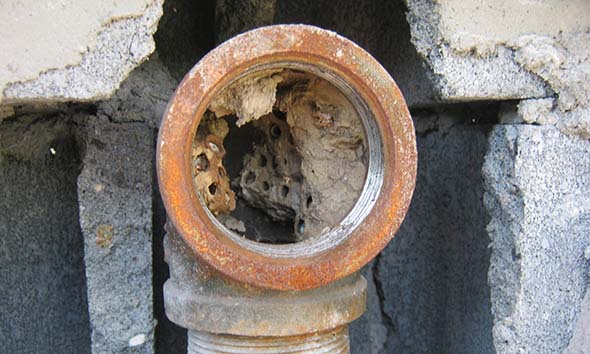 Get Your Boat Ready

This insect is a problem for the recreational boating industry too. Boats that are stored over the winter are appealing to wasps because the boat is void of human activity. A boat mounted on a trailer or a jack stand is an ideal protected nesting location for wasps. The wasps like warm spaces and motor cowlings will trap heat when exposed to the sun, making it a perfect incubator for young wasps. This issue is so common that BoatUS Magazine includes a visual inspection list for mud dauber nests in their Spring Engine Startup Guide.

The airline industry is another group that sees its share of insect problems. In the past 5 years there are 20 documented cases of aircraft accidents due to mud wasp infestations. The Civil Aviation Safety Authority (CASA) in Australia sent out a wasp infestation alert that warned of blockages in fuel vent tubes, drains and carburetors. Nests in the fuselage on flight control cables wires were also found.

CASA recommends that owners and operators follow the manufacturer’s maintenance instructions with regard to parking and storage of aircraft. In addition:

It can take mud wasps as little as 20 minutes to build a significant nest. In Brisbane Australia, an Airbus A330 had to abort a take-off for an airspeed indicator failure. The maintenance crew found the captain’s pitot tube was significantly obstructed by a mud-dauber nest. This buildup of nest material occurred during a 2-hour layover at a loading gate. 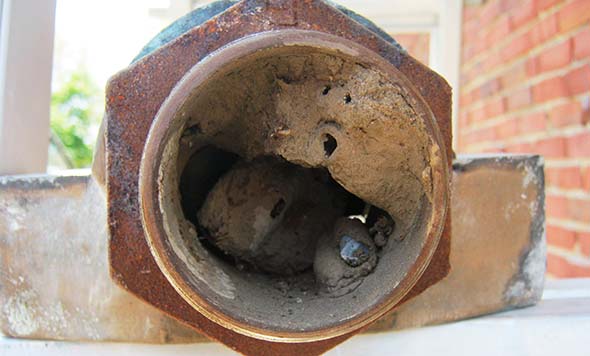 Wasps are not the only insects that like to make homes in fuel system piping. Spiders will weave webs and store captured prey in fuel tank vent pipes. Moths in their caterpillar stage look for dry spaces that are protected from birds. They will crawl into vent pipes and spin a silken cocoon to protect them as pupae. Once the cocoon is finished, the moth caterpillar molts for the last time, and forms a pupa inside the cocoon. When the adult hatches it leaves the cocoon behind. If you have enough moths do this in the same pipe it will block air flow.

A blocked pipe can restrict the flow of fuel into your oil burner or carburetor. Fuel system vent lines are important because they allow pressure within the fuel tank to equalize when product is removed from the tank. A visual inspection is a good preventative measure. Most home heating oil tanks have a vent and fill pipe that are located close together so the oil supply company can monitor the vent whistle during delivery. Check that the vent cap is secure and has a screen that prevents insects from entering. Commercial tank vents can be mounted on top of the tank or located on the side of the building. A ladder is typically required to inspect these vent caps and the same visual inspection of the screen applies. The other item to check on commercial tanks is the remote fill port. Ensure the cover closes properly and the dust cap has a gasket that makes a tight seal.

Mud daubers are most active in spring when they build nests and prepare them for new larvae. Fall is the best time to check your vent pipes and fill ports for caterpillars. Spiders create webs and store food from April to November in Massachusetts so a regular check for new webs is the best strategy. While these insects are considered good it might be easier to make your property a less inviting nesting location. One method is to attract insect eating birds by putting feeders in your yard. No matter how you deal with these critters, don’t ignore them because they are persistent. The best way to prevent fuel system problems is to start with a spring tank inspection and correct any issues as soon as possible.