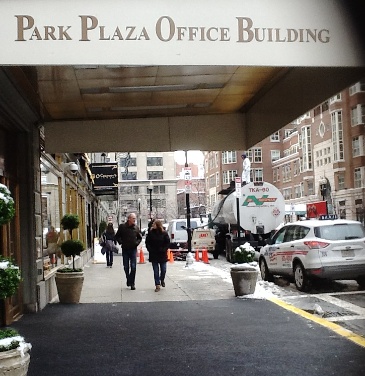 A picture of the front entrance with CommTank crews setting up to transfer the fuel out of the aboveground tank. 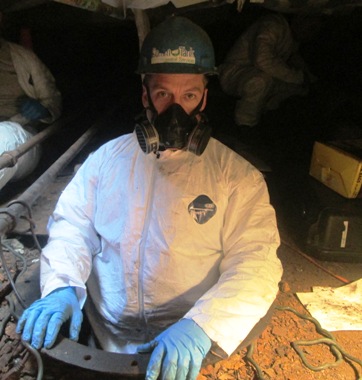 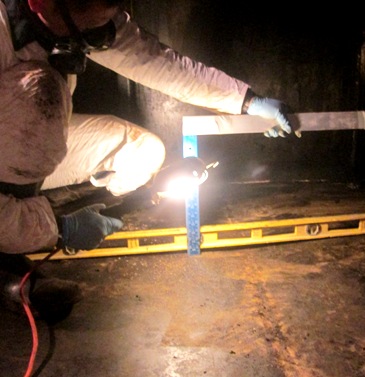 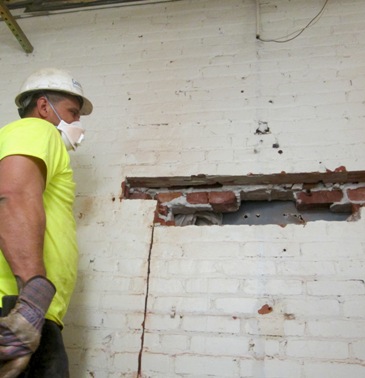 A CommTank technician has removed a portion of the brick wall so that we can brace the area to make an opening. 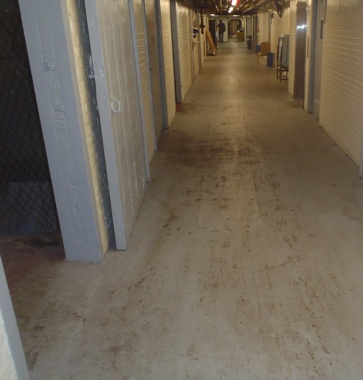 A view of the hallway that the sheets of steel were moved through before going into the recycle container. 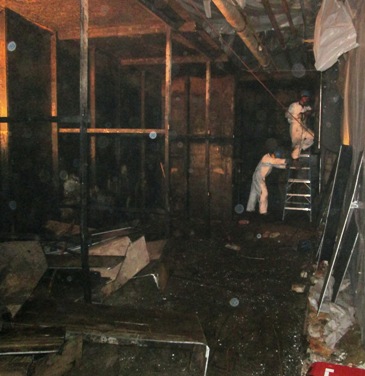 CommTank crews cutting the steel tank into 4x6' sheets so it can be moved through the ground floor door ways of the building.

The Boston Park Plaza project was completed in the spring of 2014. The property management company that maintained the office building was Sunstone Hotel Investors, Inc. The management team needed advice on whether they should repair and upgrade the two existing 30,000 aboveground storage tanks or remove them and provide an alternate fuel source. Sunstone chose CommTank to evaluate the condition of the containment walls and provide a STI tank inspection. The tanks were horizontal, single-walled construction measuring approximately (28’L x 15’W x 10’H). It is estimated that the tanks were put into service circa 1920. The ASTs were located in the basement of 50 Park Plaza and used for storage of heavy heating oil.

At the time of inspection, the tanks were pumped out and cleaned. It appeared that the corrosion in many areas had penetrated a significant portion of the steel construction of the tanks. It was also noted that the tanks had severe deflections in the side-walls and floors. Based on the inspection finding, CommTank recommended that the tanks be removed from service. Due to the deflections and corrosion issues, the tanks were at imminent risk of failure and restoration of the tanks was not economically feasible. After reviewing the report Sunstone decided to hire CommTank to remove the aboveground storage tanks from service and have them dismantled.

The process for removing two 30,000-gallon aboveground storage tanks and all the connected piping in the basement of a busy Boston office building was not a simple task. The office floors above had to be protected from diesel fumes so the entire area was contained in polyethylene sheeting. Negative air machines were set up to move fuel vapor out of the basement and vented outside and away from the building. All the cut steel that came out of the tank rooms was carted through 300 feet of hallway to a recycle container behind the building.

CommTank crews started the process by creating a doorway in the brick wall of the tank room to expose the tank sidewall. We then cut an opening in the tank so we could access supports and structural bracing. The roof had to removed first, then the sidewalls and eventually the bottom. After removing the tanks bottom plates, CommTank crews found contaminated soil. We determined that the corroded steel had failed on the bottom and leaked fuel over time. A Limited Removal Action (LRA) was proposed to clean up the contamination and Sunstone approved the new phase of the project. Under the LRA, eight tons of petroleum contaminated soil (PCS) was removed. Upon completing the soil remediation CommTank crews brought in clean fill to restore the level of the basement floor. A new concrete floor was poured over the excavated area and the project was complete.