CommTank performed a leak location identification and field leak repair on a 5,000-gallon UL142 generator sub-base tank at a data center in Lenoir, North Carolina. The work was completed in 5 days.

Watch this video to see the generator base tank repair work.

The customer contacted us looking for a repair to the inner tank of the sub-base fuel tank located under the generator. Half the tank’s capacity leaked into the secondary containment and they had a general idea of where the leak was located. CommTank’s project manager met an engineer from the manufacturer on site to discuss the most likely areas of a weld failure and the tank testing process. Due to the design of the base tank it was not possible to remove the base tank without also moving the generator set. The area of the leak could not be viewed using a video scope that was placed into the fill port or the sensor ports because support baffles blocked access to the leak area. A sonic leak detector was brought to the site to aid in the tracking of the leak. 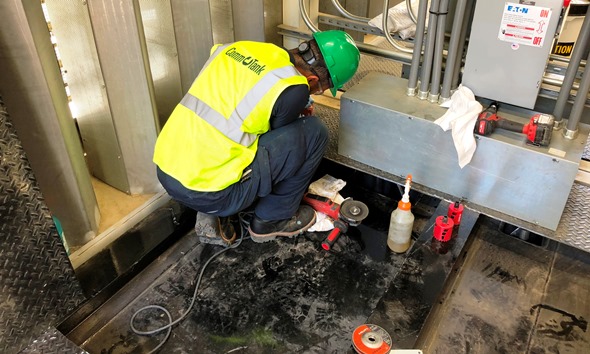 CommTank technician cutting the diamond plating to gain access to the base tank top.

CommTank brought large temporary tanks to provide storage for the remaining fuel. We also provided and installed a 400-gallon tank that the generator would run on in the event of a power outage during the repair. The maintenance staff in charge of testing/priming the generator tested the genset operation to make sure it would run on the 400-gallon temporary tank. The crew removed a section of the diamond plate in the suspected area of the leak to get access to the top of the base tank. Crews drilled a 2” opening into the primary, inserted a borescope and pressurized the secondary tank to 1.5 psi. After scanning the inner walls of the primary tank, evidence of a leak was observed in the stub-up area. The stub-up is an opening in the middle of a base tank that allows electrical connections to be made from underground power lines. The remaining fuel was transferred from the primary and interstitial space to the temporary tanks and an opening was cut into the primary tank to access the leak location.

The area of the leak was prepared for welding by grinding off the damaged weld. A new weld was added to the plates around the stub-up and metal filings and weld debris was vacuumed out.  The plate above the area was reinstalled and the primary tank as pressurized to 1.75 psi to confirm tank integrity. After the primary maintained pressure for 3 hours the remaining fuel was filtered and returned to the primary base tank. 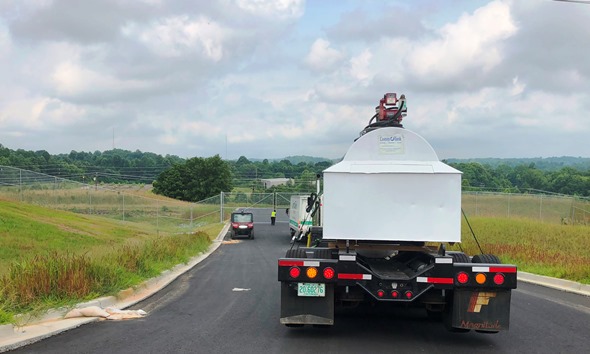