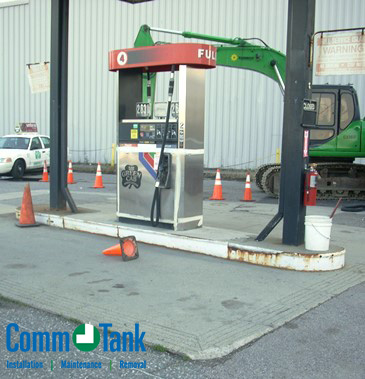 The gasoline dispenser before it was disconnected, drained and dismantled. 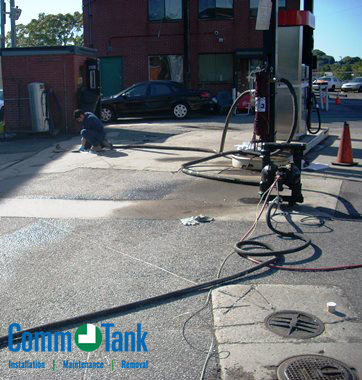 CommTank technician is pumping out the gasoline from one of the underground tanks. 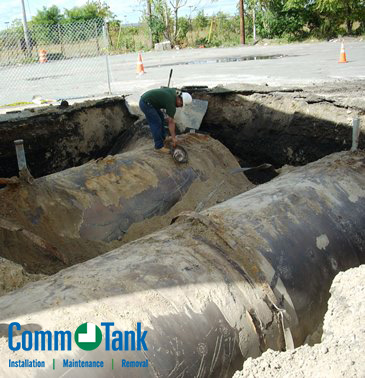 CommTank technician is removing the tank gauge and sensors. 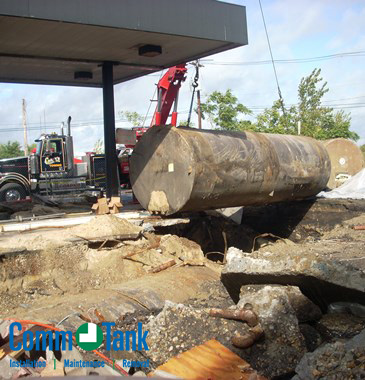 This photo shows one of the 10,000-gallon underground gas tanks being removed. 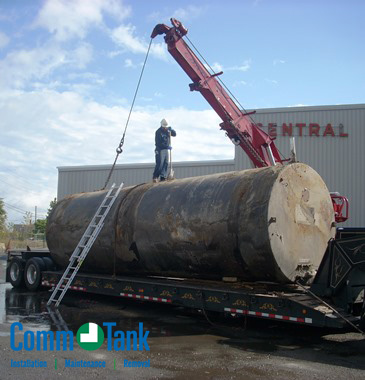 The underground gas tank has been loaded on a flatbed trailed and is ready for disposal. 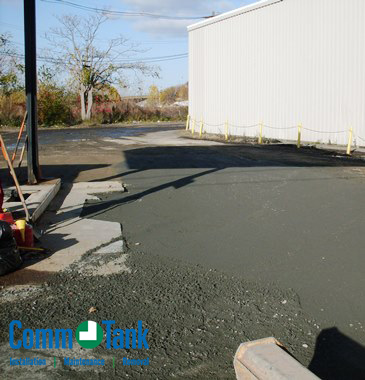 The former location of the underground gas tanks have been back-filled and leveled.

CommTank was hired by the Green Cab Company of Somerville Ma to dismantle a gas dispenser island and remove one 6,000-gallon and two 10,000-gallon underground gasoline storage tanks. When crews arrived on site they installed fencing around the area where the underground tanks were buried. They pumped out roughly 155-gallons of fuel from the tanks, drained the supply lines, and dismantled the gas pump. Crews began excavating near the pump house. An electrician was brought in to disconnect electricity from the pump house building so that could be dismantled as well. The building was demolished and all material from the pump house was separated for recycling. CommTank’s machine operator removed the cement pad from the tank top and began excavation around the tanks.

The gasoline tank tops were cleaned as part of the preparation for removal. The Red Jacket fuel pumps were removed and placed in the garage bay. The crew detected a strong odor of gasoline along one sidewall of a 10,000-gallon tank. CommTank’s project manager contacted a LSP to assess the site and provide direction for further work.

The LSP gave his approval to proceed with the gasoline tank removal and work resumed. Dry ice was placed in the each of the tanks to displace fuel vapor. All 3 tanks were tested using an LEL meter and were determined safe to enter and clean. A crane was hired to pull each tank from the excavation and examined by the LSP. The excavations were secured but not backfilled until soil samples could be taken from the bottom and sidewalls. Samples proved to be clean so 262 tons of backfill was brought in to begin closure. The excavation for back-filled, compacted and the fencing was removed.