We began work on March 3, 2017, by removing three 8,000-gallon gasoline USTs and one 8,000-gallon diesel UST. CommTank crews installed a chain-link fence and privacy fabric around the work area before excavating the area. Crews broke the concrete and asphalt on top of the USTs and excavated the soil around them. The USTs were then transported and disposed of at a licensed tank yard. We also drained, disconnected, and removed the existing dispensers.

Watch this video overview of the project

Twelve concrete dead-men were installed to anchor the new USTs. The non-degradable geotextile fabric was installed to protect the stone and fill from infiltration by the native soil. Approved base fill was installed under and around the tanks and piping.  The tanks were pressure tested and checked for leaks during installation and the results documented.  Two observation wells, three containment tank sumps, and five dispenser sumps were installed. D/W flex product piping with secondary conduit and entry boots was used to connect the USTs to the dispensers.  A new Veeder Root™ TLS 350 System with two interstitial space sensors and three fuel level probes were installed.

New conduits and wires were run to connect the sensors and level probes to the new Veeder-Root™ fuel monitoring system inside the building, along with an audible and visual overfill alarm and eight sump sensors which will monitor loss of product within the underground piping and sumps.  Three aluminum drop tubes with overfill prevention valves were installed on the three fill ports along with 5-gallon spill buckets. Two single-wall fiberglass reinforced plastic (FRP) vent pipes were connected to the USTs and transitioned aboveground to a schedule 40 galvanized steel vent riser with an approved vent cap. 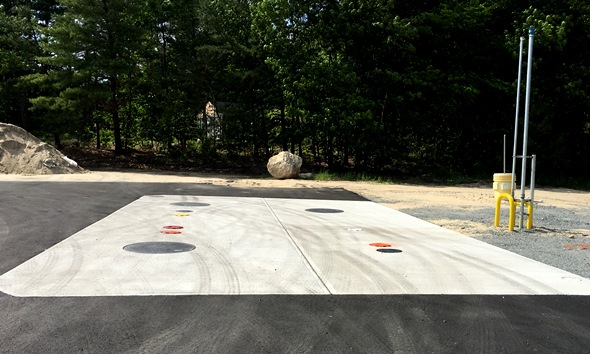 CommTank also installed one single-wall fiberglass reinforced plastic vent line for the 6,000-gallon diesel compartment which transitioned to schedule 40 galvanized steel vent riser. Three 2 HP submersible pumps with mechanical leak detectors and control boxes were installed to pump fuel from the tanks. Two-Stage I vapor recovery ports with spill containment and caps were installed for each gasoline compartment. Stage I vapor recovery is not required for diesel fuel. 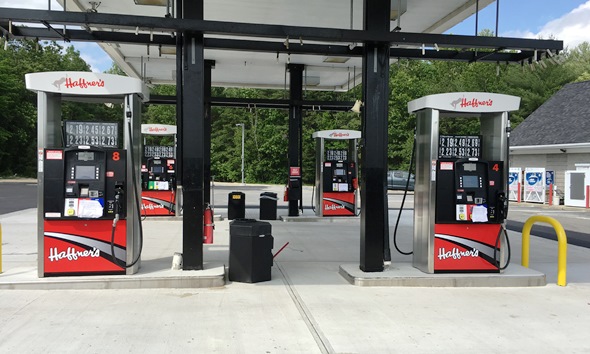 New stainless steel forms and dispenser islands were built and poured by CommTank crews.  Four U shape bollards and four standard 6” bollards were installed to protect the dispensers from vehicle damage. Five new dispensers were installed with all necessary explosion-proof electrical conduits and wiring for the dispensers and submersible pumps. An 8” thick concrete tank pad (38’x28’) was formed on top of the USTs that allowed surface access for delivery trucks. A 6” thick concrete drive mat (25’x25’) was constructed for the diesel dispenser, including positive limiting barriers. A 6” thick concrete drive mat (44’x48’), including positive limiting barriers, was formed and poured for the gasoline island. 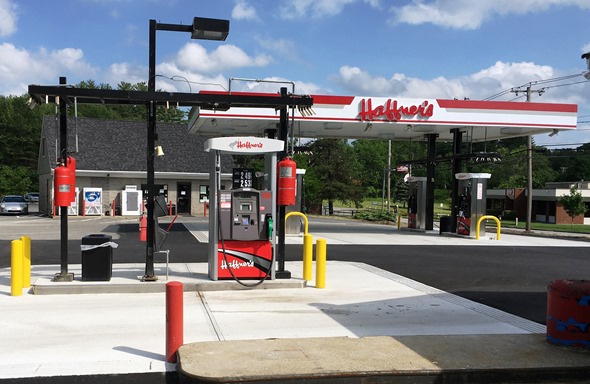 CommTank programmed and certified the Veeder-Root ™ TLS 350 System, which measures liquid in the interstitial space (between the inner tank and outer containment).  The system is capable of detecting any leaks that may develop in the underground fuel lines. The Veeder-Root also measures the amount of fuel or water (if any) inside the tanks and triggers an alarm if the tanks exceed their filling capacity.