CommTank provided a gas station construction service for the Energy North Group at their Mobil station and convenience store located in Berlin, Massachusetts. This project included the removal of one 4,000-gallon regular unleaded gasoline, one 8,000 super unleaded gasoline, and one 6,000-gallon diesel UST. The underground storage tanks were replaced with a 21,000-gallon dual compartment gasoline tank and a 10,000-gallon diesel tank. The project also included the replacement of 5 fuel dispensers with Gilbarco Encore 700 S models.

CommTank crews started the project by installing fencing around the construction site to protect pedestrians and customers of the convenience store from the work and debris. They removed the existing gas and diesel dispensers and broke up the concrete around the fuel island and buried USTs. Four steel underground tanks were removed from the site and brought to a recycling yard. The tank graves were then prepared for the new USTs by leveling, adding a crushed stone base, and placing concrete dead men to use as anchors.

Two new Containment Solutions double-wall fiberglass USTs were delivered and installed. One tank was a 20,000-gallon and the other a 12,000-gallon split compartment tank. The excavation and tanks were backfilled with crushed stone before the crew stopped to re-test the underground tanks for tightness. Landscape fabric was used to prevent native soil from mixing with the new stone. Fiberglass sumps and 5-gallon spill buckets were installed next along with the gas dispenser sumps. Double-wall fuel lines were run from the fiberglass tanks to the dispensers. 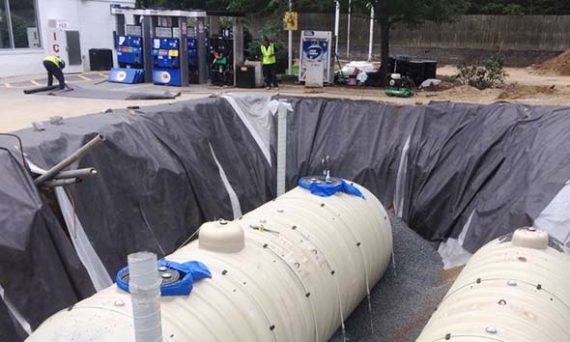 The secondary containment of the fuel lines was tested to ensure they were installed correctly. The fuel lines were pressurized to test all the connectors and fittings and dispenser sumps were filled with water as part of a hydrostatic test. Storm drain pipes were connected to the canopy gutters and then piped to a dry well to remove collected rainwater. CommTank crews replaced the native soil over the USTs and compacted it to prevent future settling. This provided a solid base for the new tank pad that was installed on top of the USTs.

Before the concrete was poured, a frame with rebar grids was constructed and leveled by CommTank crews. A broom finish was applied to the tank pad to provide a non-skid surface. New piping was installed to connect the fuel dispensers to the gasoline and diesel submersible pumps. Sensor wires were fed through piping to the Veeder-Root TLS 350 system which was programmed to measure high and low levels and provide leak detection. The new Gilbarco 700 Encore 700 S gasoline and diesel pumps were outfitted with numbers and Mobil badging before the station reopened for business. 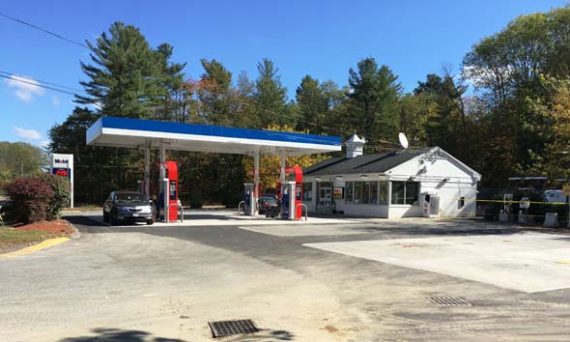