The Risks of Purchasing Property with an Abandoned Underground Tank

Home Inspections during a real estate transaction always seem to dig up concerns that affect the sale. Whether it’s a wet basement, electrical wiring being up to code, or an underground fuel storage tank located in the yard; there are many issues that could impact the negotiations. Buyers and sellers aren’t always aware of items that will stop a real estate sale in its tracks. 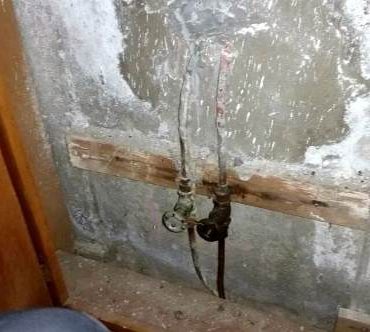 When old piping for an underground storage tank (UST) is discovered by a home inspector it raises a flag about if or how the tank was removed. When a tank was removed but the piping was left in place, it is important to investigate further to ensure a complete and proper disposal was done. The first step, in this case, is to check with the Fire Department. They should have a permit on file indicating when it was removed and who inspected it. If a permit is not on file then it means the homeowner did not hire a tank removal contractor or they didn’t hire a contractor that did their due diligence. In this case, you should assume the tank was not properly inspected at the time of removal. If the tank was inspected but the original piping remains, there is concern it may have been a source of a potential leak. When a UST is removed samples are taken from beneath the tank to test for any fuel leaks. This step should also be done for the piping. The supply and return piping are made of steel or copper and they will corrode as quickly as the tank if left unprotected in the soil. We have removed underground storage tanks that were intact but the steel line connecting the tank to the oil burner had leaked. Leaks of this type can occur slowly over time so the homeowner may not notice a difference in oil consumption. A slow leak can amount to a big loss of fuel over time and spread to areas under a foundation. We have seen small leaks occur over a 20-year period that contaminated the soil under a deck, the yard, the groundwater supply, and large areas under the house foundation.  The homeowner wasn’t aware that anything was wrong with the tank. 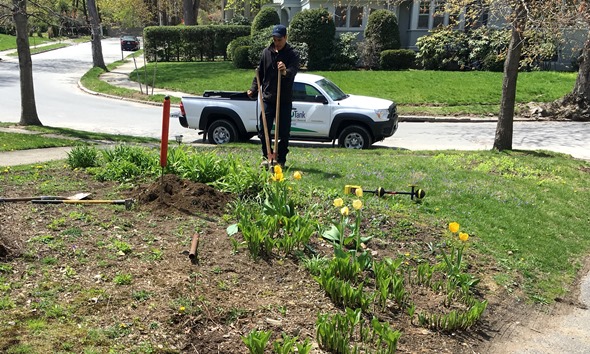 A call to an underground oil tank locator is the next step when an underground tank piping is found during the home inspection process and the homeowner has no paperwork showing a tank was removed. Technology has come a long way from the early metal probes that were driven into the ground to locate a tank. Utility locating tools now include line transmitters and inductive signal clamps that increase the reliability of locating hidden oil tanks. A trace signal is sent down the pipe and the locator is passed over the area where the tester is searching. A low range frequency can travel long distances and will not jump on to other pipes and cables. When there is a match to the frequency the locator will provide information on the size and how deep the tank is. 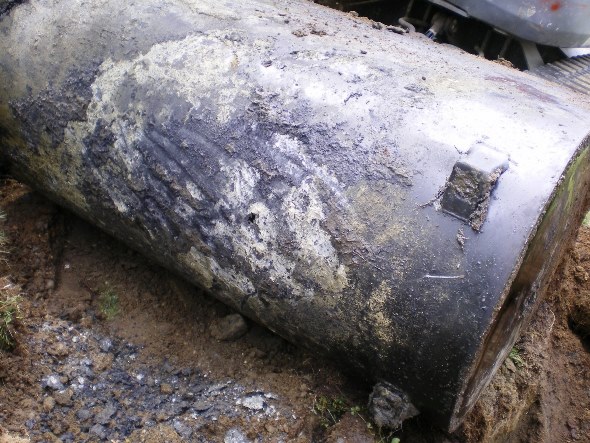 Leaking underground oil tank after removal from the ground

A house that was built prior to 1960 is more likely to have had a tank buried in the ground than newer homes. It was common practice to install tanks underground to save space indoors. Most USTs were installed between 4 and 10 feet from the house, we have seen them installed under driveways, patios, walkways, and house foundations. Underground tanks that are older than 20 years are at significant risk of leaking. Tanks that have exceeded this timeframe were installed in sandy soil with a low water table.  Abandoning USTs was a common practice when switching to aboveground storage tanks. That practice is no longer recommended because it’s difficult to prove a tank did not leak. Mortgage and insurance companies will require removal of the tank before a loan or insurance is approved. It’s important to perform your due diligence when investigating a property. Do not assume an underground tank doesn't exist simply because it wasn't disclosed. 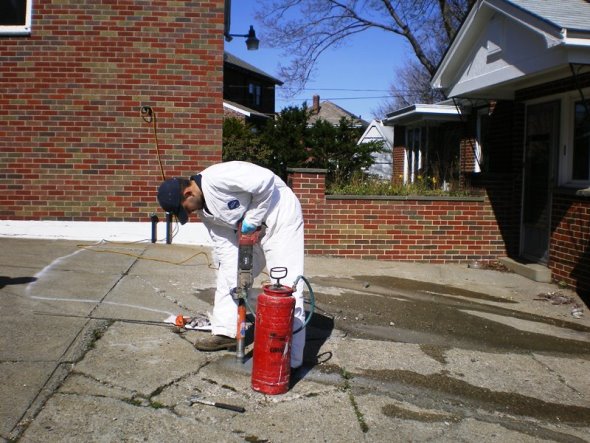 Coring through cement prior to installing a groundwater test well

Ensure Your Property is Free of Fuel Oil Contamination

After many years in the fuel storage business, I find myself surprised that someone would purchase a property without performing a thorough site assessment. How do you know if a tank was ever installed on the property? If there was a buried oil tank, how do you know it was removed properly? There are three things you can do to address these questions.

First, check with the local fire department for any fuel storage permits on file. When there is a record of a UST on the property, but no record of it being removed, this should raise a red flag. If a fuel storage tank has been removed from the property, request a ‘tank closure report’. The underground tank company that removes the tank is required by law to take soil samples around the tank and buried piping, the report will tell you if any contamination was found. Fire Departments have some leeway when it comes to buried fuel lines, they can be left in place if they run under driveways, trees, shrubs, porches and/or decks. The standard practice is to cap off the lines and abandon them. In this case, how would you know those pipes were intact? The best method to confirm pipe integrity is to pressure test it. 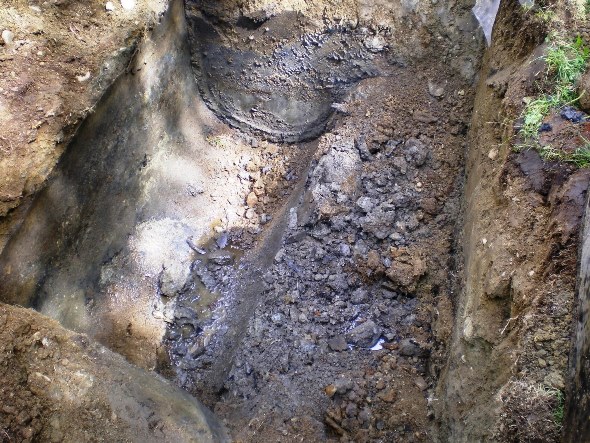 Next, examine the state records for the property. A site that had contamination would have been reported and a case opened for it. You can find records for all Massachusetts properties at the MassDEP's Waste Site Cleanup Program website.  The same information is available from New Hampshire’s Onestop Program located in the NH DES searchable database.

The third tool at your disposal is a limited subsurface investigation to test the soil and groundwater. It’s important to know the condition of the property you’re planning to purchase. There are many homeowners that do not take responsibility for their leaking tanks. Frequently we encounter basement oil tanks that have large stains under them. Without performing a test of the soil, how would a home buyer know if the stain indicates a small or a large leak? Some sellers will paint the floor to hide stains; a newly painted floor in a home where an oil tank was removed is a red flag. We have also seen homeowners dig up an underground tank with leaking supply lines, move the underground tank to a new location that is away from the contaminated soil. Don’t assume every oil tank was maintained and removed properly. Protect yourself from future liability by requesting a limited subsurface investigation. 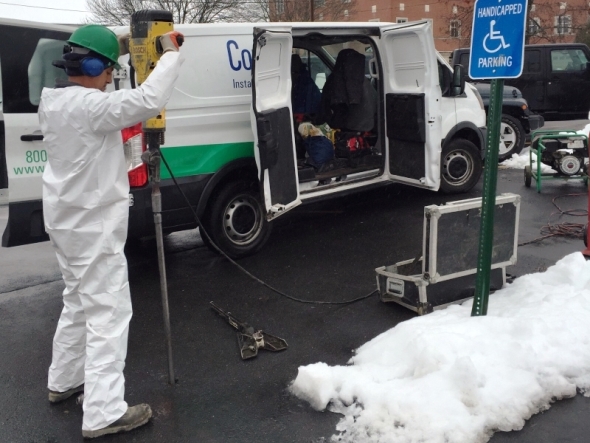 A Limited Subsurface Investigation (LSI) is an ideal method for testing the soil around the former tank and piping to see if there was any contamination. Contaminated soil can be dated so there is a chance you can point to a previous owner even if you didn’t operate a tank on the property. Here are the steps taken to perform an LSI:

Video of a monitoring well installation next to an underground storage tank
A subsurface investigation is not a perfect tool. Soil that is composed of sand will allow a slow leak to drop vertically until it hits a confining soil layer like clay. If you drill next to an area where a leak occurred in sand, you may not find oil. If clay is present right below the area where the underground oi tank was located it is more likely you will find contamination. Clay not only confines a leak but absorbs it like a sponge. If the area above the clay has water in it, a monitoring well will be installed to let the groundwater seep into the well. After proper development of the well, our technicians will take a water sample and send it to a lab for testing. Lab results can be rushed if a purchase and sale is pending and a quick turnaround is needed. The cost of a subsurface investigation typically ranges from $1,200 to $2,500 and includes a laboratory analysis and outcome report. 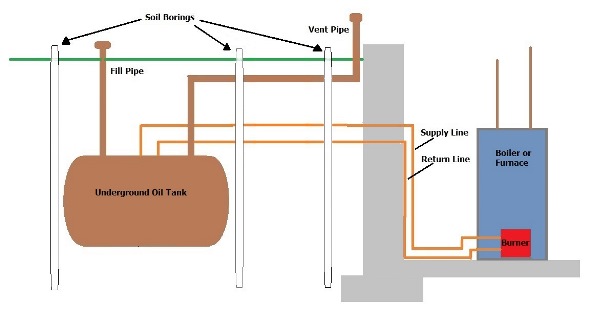 Liability - Who is Responsible When the Sale is Complete

It is important to understand that you, the owner, are responsible for cleaning up contamination on your property. If you purchase a property “As Is” then you assume liability for that cleanup. You are also responsible for cleaning up pollution that has traveled from your property onto another property. Fuel oil is lighter than water; it will penetrate soil until it encounters groundwater, and then travel on the water surface. Groundwater moves at different rates and can migrate great distances depending on the soil composition. A heating oil release includes any kind of spill or leak from the oil tank, oil delivery line, or another part of the heating system.

You may pursue the seller in court to recuperate clean up expenses, however, you must prove the seller was deceptive during the transaction to be successful. Many homeowners have purchased homes without knowledge of an abandoned underground tank on the property.  This was not typically disclosed years ago, as there was little awareness of the environmental hazard presented by a leaking tank. Make sure to cover yourself from future risk during the transaction, if the home had a buried tank removed, get a copy of the tank closure report and any lab reports.

It’s best to have underground oil tanks removed prior to closing on the sale of a home. Many buyers will include the removal of the underground tank as part of the terms to their offer. The removal cost of a residential underground oil tank ranges from $1,000 and $2,500 depending on size. Typical residential oil storage tanks are 275, 500, or 1,000-gallons. Understanding the scope of the project and your liability will help you to negotiate and keep your transaction on track.