A tank overfill alarm alerts the delivery person before the tank becomes full.

In 1988, the EPA required new underground storage tanks to include overspill protection, prevention and detection. The rules require that an overfill device must be installed on all tanks that are filled by fuel transfers of more than 25 gallons at one time. Tank owners and operators are responsible for ensuring the right amount of fuel is ordered and delivered and the overfill prevention device (OPD) is the backup to ensure a fuel overfill does not occur. In 2013, the New Hampshire Department of Environmental Services (NHDES) released new sets of regulations that require these devices to be inspected monthly and tested every three years starting no later than December 22, 2017.

There are 3 types of overfill prevention devices for storage tanks

Overfill prevention devices must shutoff/activate at these levels set by the certified UST installation contractor at the time of installation: 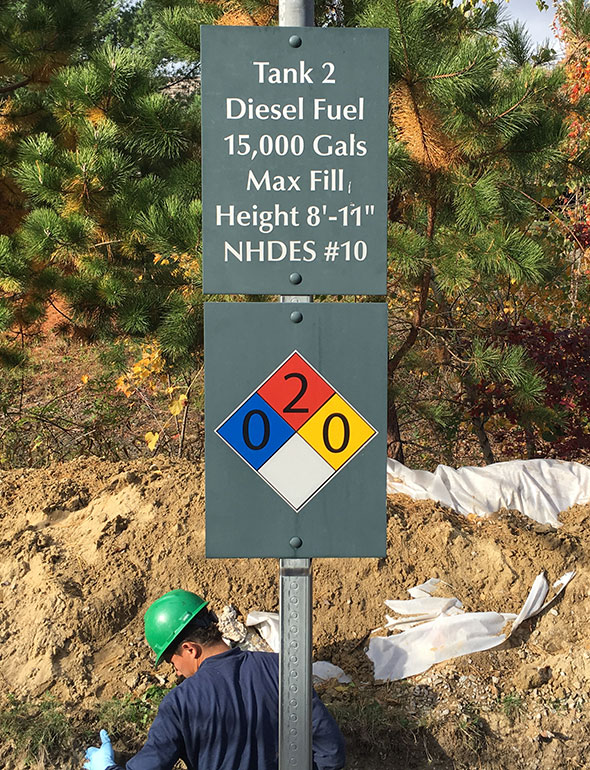 Educate and alert your delivery person by placing a clear sign near your fill pipes.

Where are Valves and Alarms Installed on a Tank?

The overfill prevention valve is located within the drop tube and the drop tube is installed inside the fill pipe. Ball float valves are installed below the vent line outflow piping. Tank overfill alarms are a combination of sensors, visual/audible alarm and ATG. The tank alarm sensor is typically installed in an access pipe located near the middle of the tank. 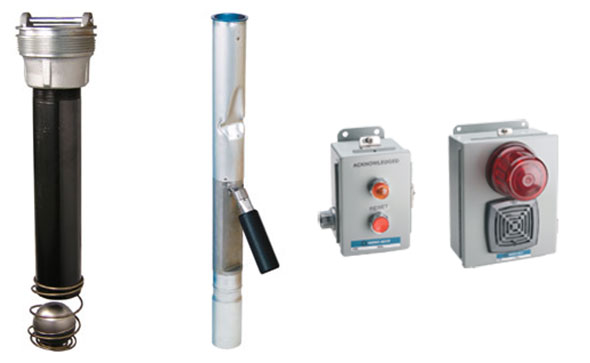 As of September 2013, the NHDES no longer allows ball float vent valves to be installed on new tanks or tanks where an automatic shutoff device is installed or replaced. Float vent valves allowed for USTs to be over pressurized and potentially damaged. A delivery driver has to feel the hose for fluid flow or monitor a sight glass for bubbles that shows product flow. Manufacturers do not recommend using float vent valves with suction piping, pressurized delivery, or coaxial Stage I vapor recovery. Ball check valves should not be used when systems are equipped with vapor recovery.

Of the three available overfill prevention technologies, tank overfill alarms are the most versatile. Alarms may be used with tanks that receive pumped or gravity deliveries and with tight-fill or loose-fill connections. This type of overfill device activates and audible and/or visual warming to delivery personnel when the tank reaches 90% full. A typical overfill alarm can be tied into an automatic tank gauging (ATG) system. The ATG should have the ability to trigger a remote alarm. The alarm must be placed in an area that will alert delivery personnel when the tank is no more than 90% full.

Tank overfill alarms are not recommended as the primary OPD because they require the fuel delivery driver to take action when the alarm is activated. The fuel delivery operator must be able to see and hear the alarm while filling the tank. You rarely see fuel tank alarms activated because many underground storage tanks have more than one OPD. Most tank installed prior to 2015 had a float valve and an overfill alarm system. In this configuration the fuel flow would be restricted at 90% so the driver would know to shut off the supply at the delivery truck prior to the alarm activation. 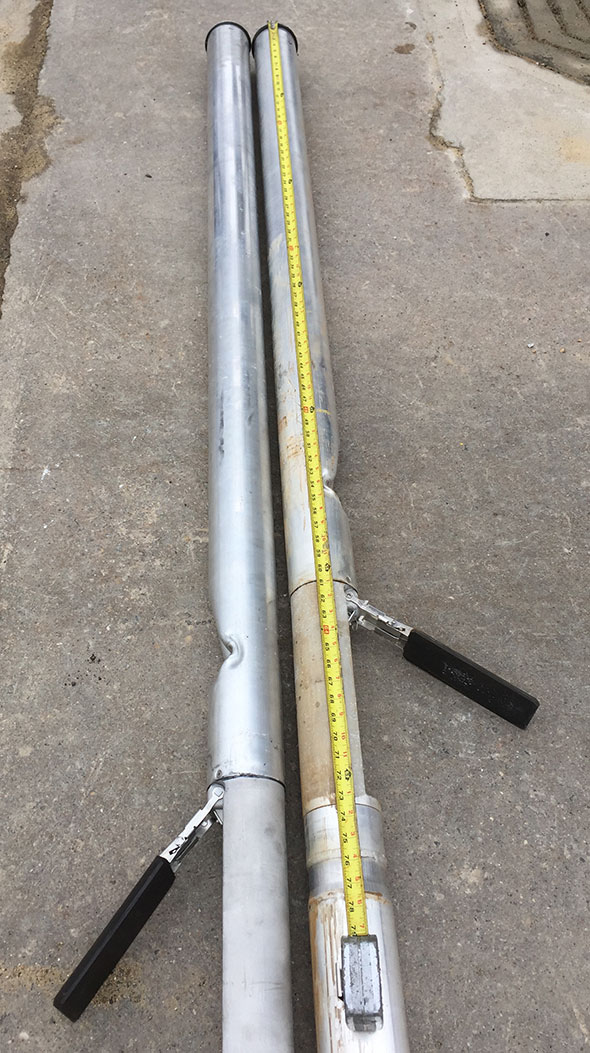 Tank Inspectors should verify the OPV is set to the correct level for each tank.

The overfill prevention valve (OPV) is installed at a depth designed to stop fuel flow when the tank reaches 95% capacity. The valve uses a float that rises with the liquid level and closes a poppet within the drop tube. There are two styles of valves which use either an internal or external float. They also are made with vapor tight or non-vapor tight valves. Most tanks should be using the EPA recommended vapor tight valves as of 2011.

How to Test Overfill Prevention Equipment

UST Owners should repair or replace an improperly functioning tank overfill alarm. How do you know if an alarm is function properly? It would be impractical to fill an UST to 90% capacity just to test a tank alarm. Hiring a fuel system contractor that is certified in the maintenance of your equipment is the best way to test your system. The contractor will remove the level sensor and verify it is set to the correct height that represents 90% capacity. Then they will raise the sensor and verify the audible and visual alarms are triggered.

Automatic shutoff devices must stop the flow of product before the tank reaches 90% capacity. A qualified UST contractor will ensure the float arm on the OPD moves freely and the shutoff valve will close. It is important to verify that the shutoff device has not been tampered with or disabled.

It’s not uncommon for a float to be missing on older devices due to corrosion. As long as the float is attached, is connected to the valve and seats properly in the drop tube then it meets the manufactures test recommendation.

Float valves become damaged when the cage that holds the float ball corrodes. The UST contractor should check that the cage is intact and the ball can move freely. At this time all fittings on the tank top should be checked for tightness. A sensor or fill cap that isn’t vapor tight will allow air to escape and limit the effectiveness of the float vent valve.

The owner/operator must submit a copy of the completed Annual Leak Monitoring and Overfill Protection Test Form to NHDES within 30 days of testing to the NHDES. 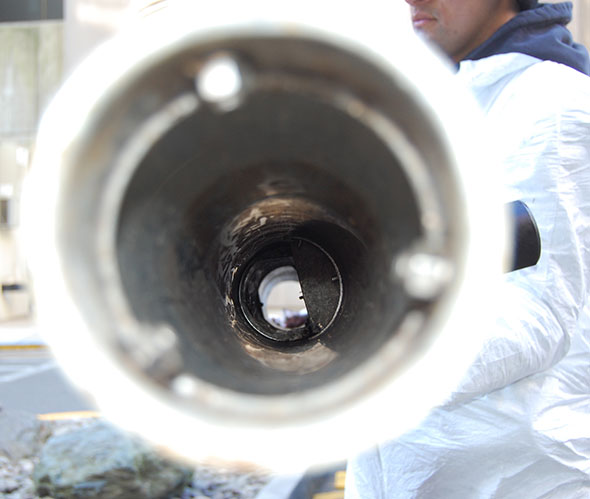 View inside a drop tube. This overfill prevention valve did not close when the float was raised.

The automatic shutoff device may fail if installed improperly. Other sensors or piping near the valve can interfere if the valve is installed too close to them. Valves may also fail pressure decay testing. A vapor tight valve must pass a pressure decay test. A properly functioning vapor tight OPV will not allow fuel vapor to escape the tank when the fill cap is removed. The following are common sources of test failures:

Do all Overfill Devices need to be Tested if a Tank has Multiple Devices?

If the UST at your facility has more than one overfill prevention device you are only required to test one of the devices as part of a tank inspection. It is important that the secondary device not interfere with the function of the primary. Ball floats are set to close at 90% capacity and the drop tube shutoff closes at 95% so they are not compatible. It is okay to use a fuel tank overfill alarm and shutoff valve in combination as long as the alarm is set to operate at a lower level. 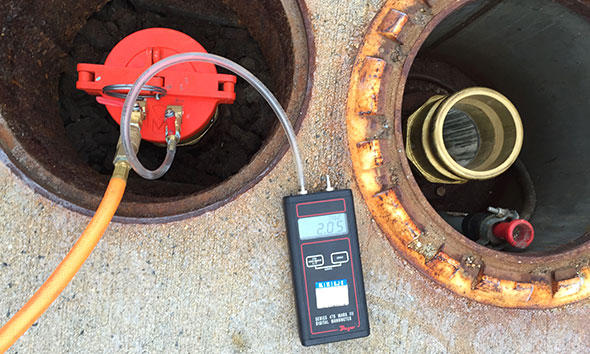 Technicians that perform the OPD tests must have a vapor recovery certification when testing gasoline tanks. They should be ICC VT, VI or manufacture certified for the Phase I equipment that they are taking out. They should use torque wrenches when replacing fittings to ensure they are tightened to meet the manufacturer’s specification. 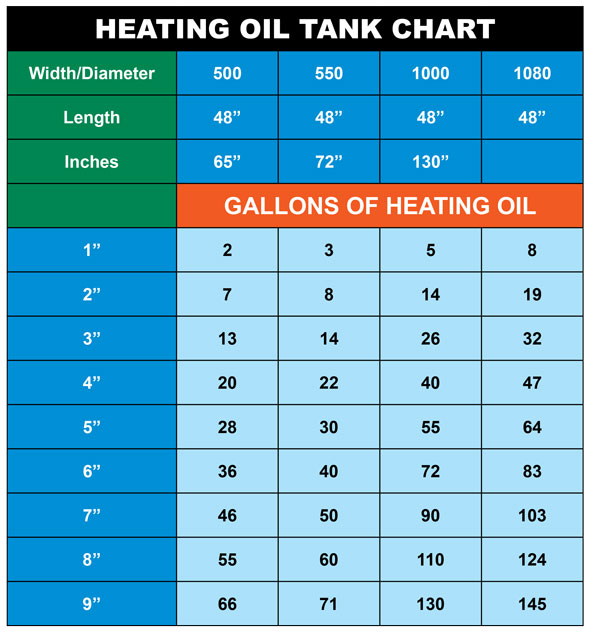 An example tank chart that shows gallons/inch for 4 different tank sizes.  Click here to download a PDF of this tank chart.

A tank chart is a table the converts the number of inches of liquid in the tank to the number of gallons. It is important to have the tank chart provided by the manufacturer to verify the correct height of OPDs in the tank. Before starting the inspection, the technician should open the fill port and use a measuring stick to verify the level on the tank matches the level on the ATG or fuel management system. 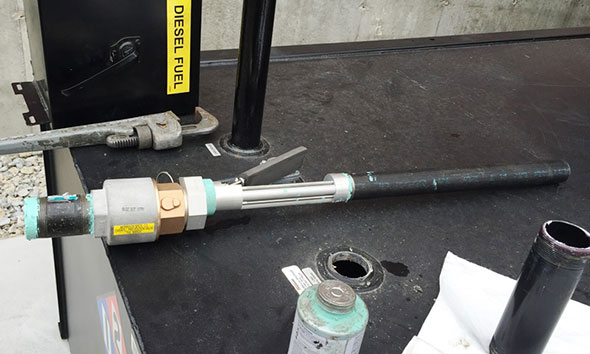 Since the EPA requires triennial testing of OPVs, manufacturers recommend that customers upgrade to a testable OPV. Current test methods involve removing the drop tube from the fill pipe and manually raising the float to see the poppet valve close. The testable valve has a fitting on the top of the drop tube that is attached to the float valve by a cable. When raised, the fitting closes the poppet valves and the tester can confirm that the valve closes via visual confirmation.