This article explains tank leak detection systems, describes the test methods for each sensor, probe, and line leak detector, and provides the testing requirements for Massachusetts and New Hampshire.

In Massachusetts, Underground Storage Tank (UST) leak detection equipment must be tested and certified every 12 months by a technician with current training from the manufacturer of the monitoring equipment as required by MassDEP 310 CMR 80. The State of New Hampshire requires the tester to have manufacturer training in accordance with New Hampshire code of administrative rules Env-Or 406.

Fuel system maintenance contractors inspect underground storage tanks at a variety of businesses and organizations. Yearly monitoring system inspections help protect our shared water supply from potential contamination. Underground tanks are typically made up of several components. These include the underground storage tanks, turbine or product sumps, underground piping, under dispenser containment, spill buckets, fuel dispensers, sensors, and a monitoring panel.  The inspector confirms the functionality of leak detection systems by performing annual inspection or recertification of the equipment.

Most sensors are monitored via the Veeder-Root monitoring system which measures a resistance on the line. If the resistance measured is within tolerance then the monitoring system declares the sensor is operational. A sensor will show as offline if the Veeder-Root measures infinite resistance on the circuit. This can occur if a line is accidentally cut by workers, the wires become frayed or the seal pack (a junction of 2 sets of wires joined with epoxy) has corrosion.

The Veeder-Root Model 420 sensor is an example of a sensor used as an annular space alarm. This bell sensor consists of a metal housing shaped like a bell with a float that slides up and down on a rod. This sensor is typically found in the annular space of double-wall steel tanks. The float indicates an alarm state when raised and a normal state when lowered. An inspector will test this sensor by removing it from the annular space and placing it in a liquid to confirm it is operational. If an alarm state is indicated on the tank monitoring system display then the sensor passed the test. It is not uncommon for the retainer clip that holds the float to corrode on older sensors. In this case, the float will no longer indicate a high alarm state. 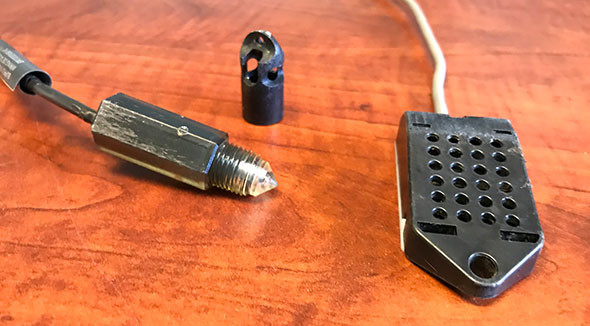 Another style of annular sensor is the wrap-around sensor. It detects the presence of liquid in the interstitial space of a double-wall fiberglass tank. The length of the sensor depends upon the diameter of the tank. A piece of string is used to pull it up from the annular space through the riser pipe. The proper test method for wrap around sensors, according to Veeder-Root protocol, is to raise it up to grade, examine the sensor to ensure it’s not damaged, and then place the sensor in a liquid. If an alarm state is indicated on the tank monitoring system display then the sensor passed the test. 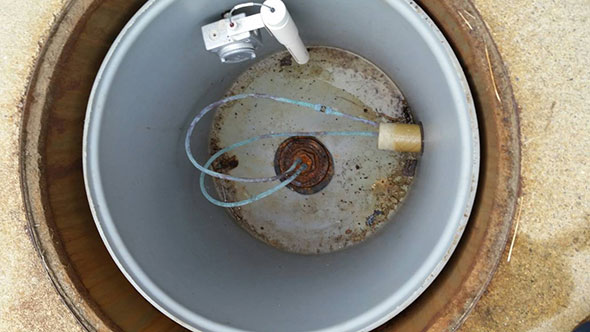 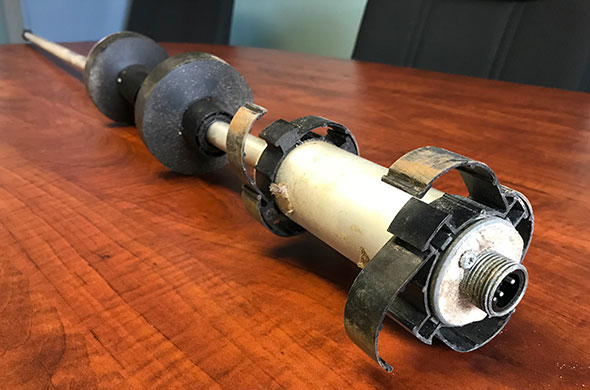 A leak detection or automatic tank gauge probe is designed for accurate inventory control and in-tank leak detection. It utilizes magnetostrictive measurement technology to provide highly accurate 0.1 GPH volumetric tank tightness testing and 0.2 monthly testing. It is certified for use in gasoline and diesel tanks. The probes will also provide overfill prevention when programmed to trigger a remote alarm if the fuel levels reach 90% capacity. Leak detection probes are used in single-wall aboveground tanks to provide leak detection where there is no annular space to place a probe. The upper float monitors the fuel level and the lower level is used to monitor water levels in the tank. These probes are installed vertically in the tank through a riser pipe which allows access for maintenance and testing.

The leak detection probe must be removed from the riser pipe to verify the operability of the sensor. The inspector will print the water warning and product height settings prior to testing. Test containers are used to simulate water and fuel levels.  By filling the test container to just above the water warning height set in the Veeder-Root console, the water alarm height can be tested. The same procedure can be used to test for low product levels after filling the test container with product. 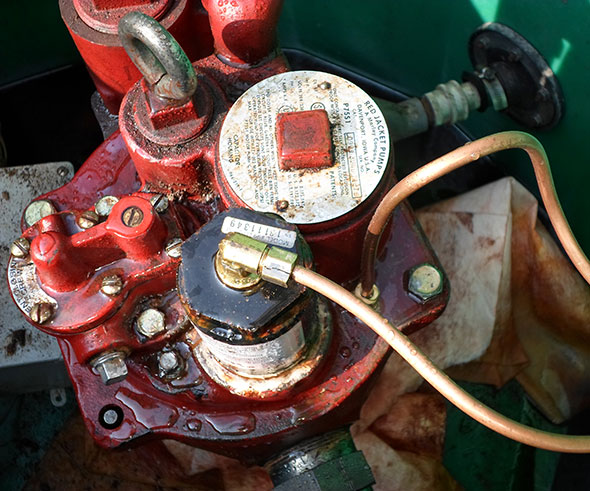 The inspector will generate a 3 gallon/hour line test failure in order to manually test a mechanical line leak detector. The test is performed by de-energizing the circuit and depressurizing the line, connecting a test plug at the bottom of the sheer valve, opening a test valve to simulate a small leak, then energize the circuit, authorize the dispenser to pump and allow the line to pressurize.  These steps will cause the tank monitoring system to run a 3 gallon/hour line test.

The Veeder-Root tank monitoring system tests electronic line leak detectors automatically.  It has control of turning on the submersible pump to run a full test manually and it runs mini-tests automatically just after it sees the dispenser handle signal and compares that line pressure after pumping to the threshold based on the length, diameter, manufacturer, and type of piping of the system that is programmed into the Veeder-Root.

Restoring Sensors to the Proper Location 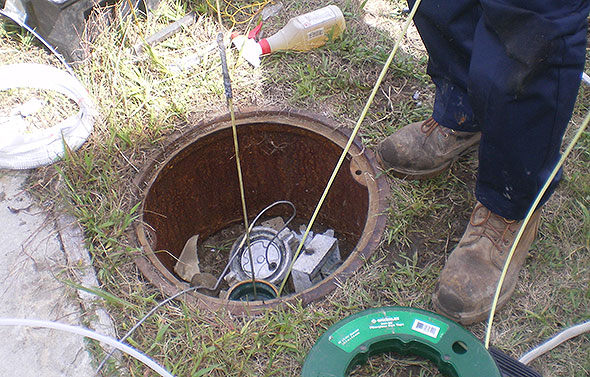 Sensors must be located at the lowest possible point so they can detect a leak as soon as one starts to occur. Technicians may handle sensors during testing or maintenance but it is the responsibility of the UST owner and operator to ensure sensors are always in the correct position. Fines and penalties are possible if sensors are not at the lowest point. The image above shows a technician replacing an annular space sensor. Veeder-Root now provides a calibrated sensor positioning strip for installing sensors in the annular space of a fiberglass tank. This strip ensures that the sensor switch reaches the bottom of the tank and is set facing upwards in order to operate correctly.